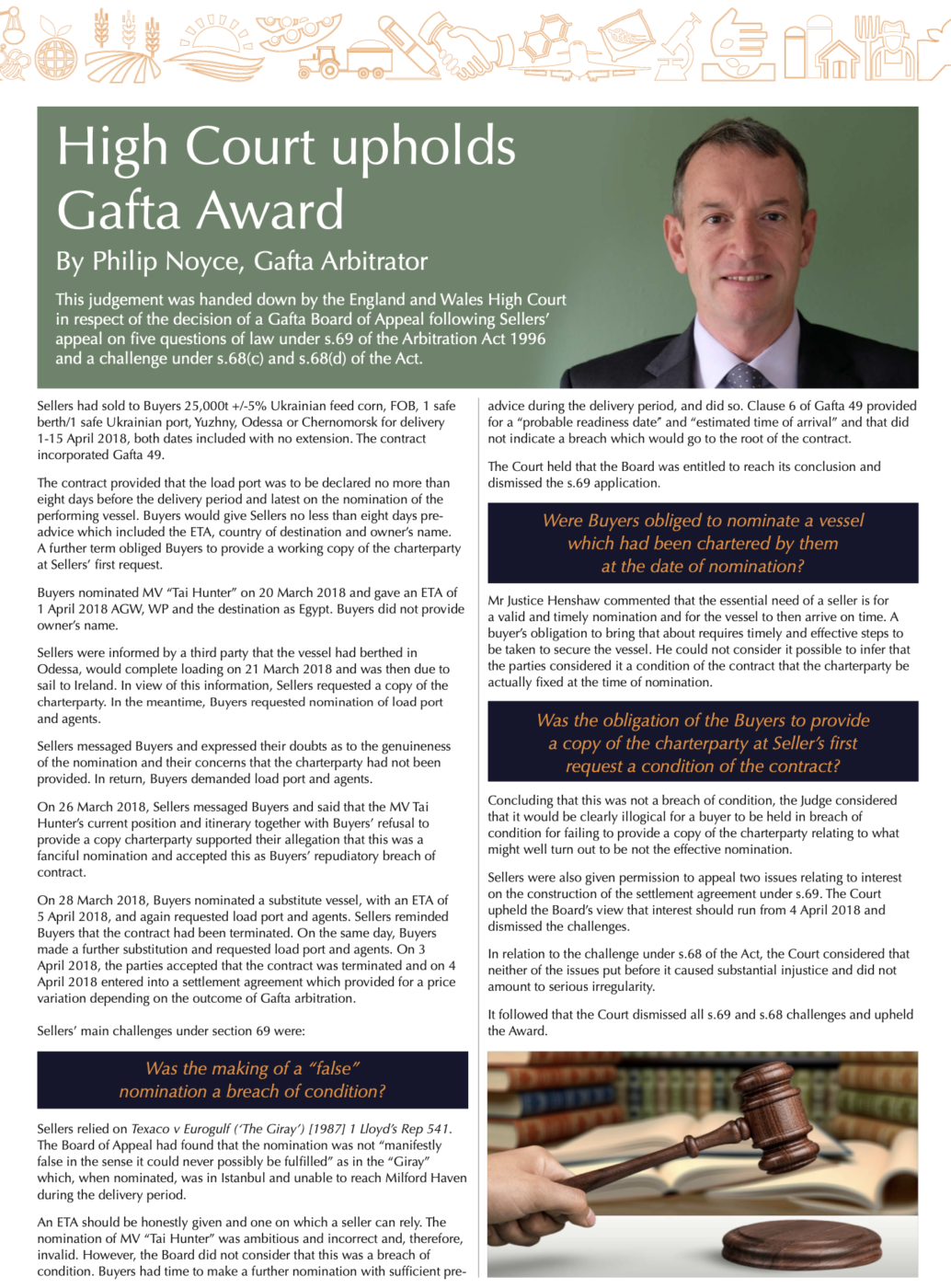 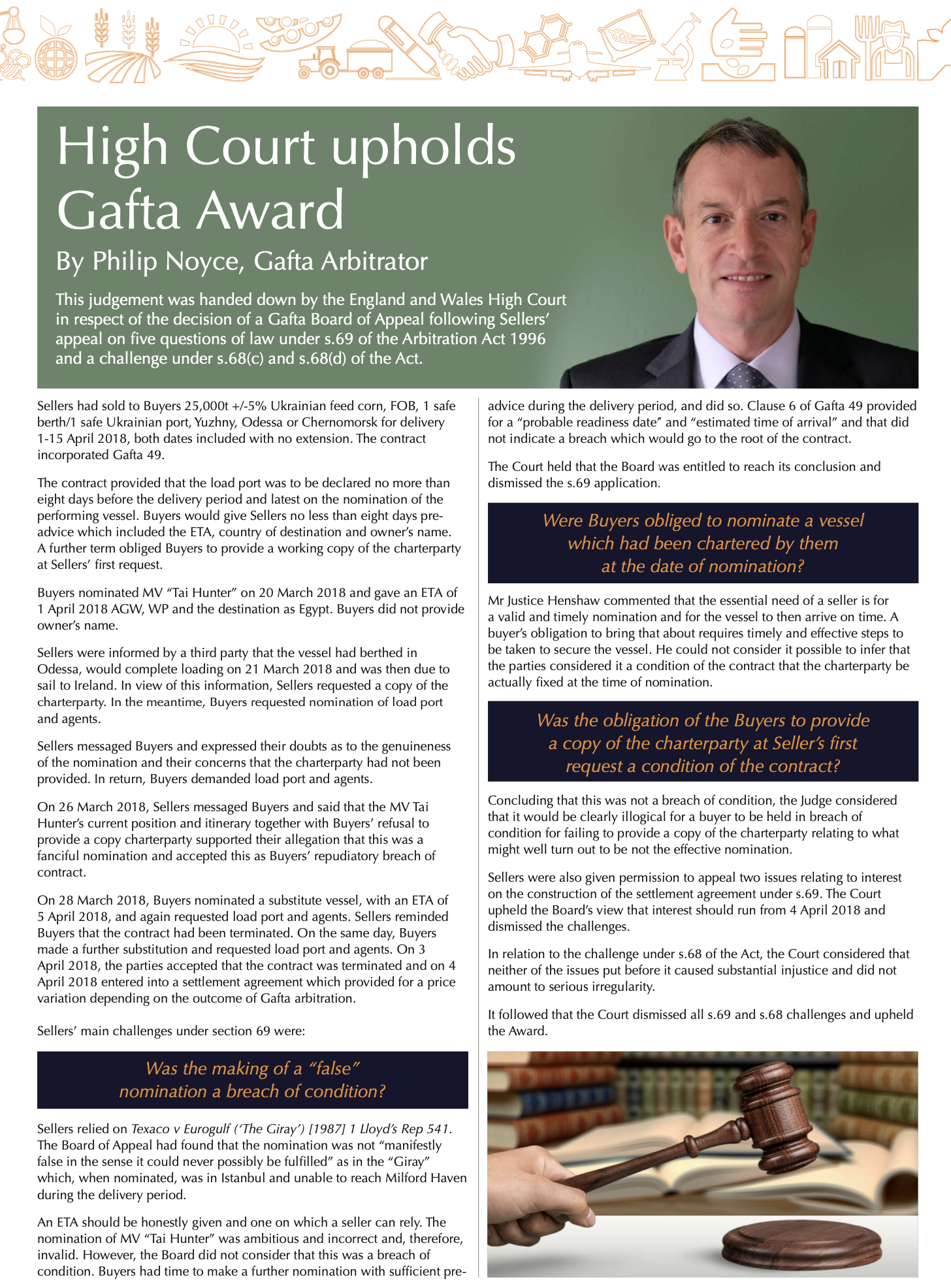 An article by Philip Noyce published in Gafta World in September 2021. 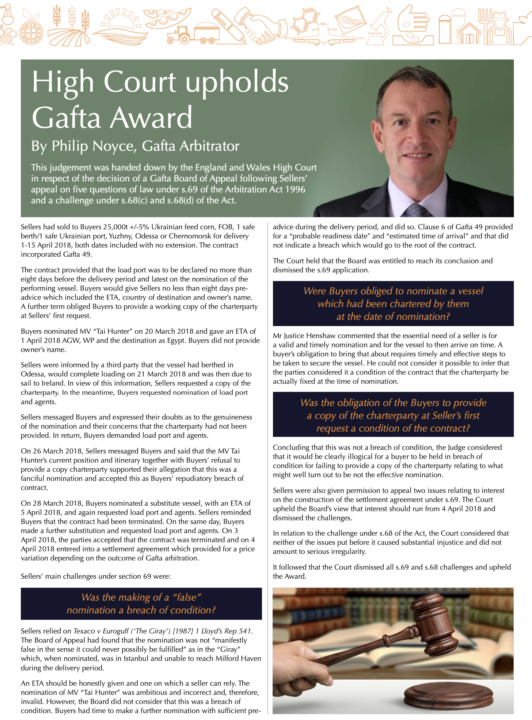 This judgement was handed down by the Court in respect of the decision of a Gafta Board of Appeal following Sellers’ appeal on five questions of law under s.69 of the Arbitration Act 1996 and a challenge under s.68(c) and s.68(d) of the Act.

The Contract provided that the load port was to be declared no more than 8 days before the delivery period and latest on the nomination of the performing vessel. Buyers would give Sellers no less than 8 day’s pre advice which included the eta, country of destination and owner’s name. A further term obliged Buyers to provide a working copy of the charterparty at Sellers’ first request.

Buyers nominated MV “Tai Hunter” on 20 March 2018 and gave an ETA of 1 April 2018 AGW, WP and the destination as Egypt. Buyers did not provide owner’s name.

Sellers were informed by a third party that the Vessel had berthed in Odessa, would complete loading on 21 March 2018 and was then due to sail to Ireland. In view of this information, Sellers requested a copy of the charterparty. In the meantime, Buyers requested nomination of load port and agents.

Sellers messaged Buyers and expressed their doubts as to the genuineness of the nomination and their concerns that the charterparty had not been provided. In return, Buyers demanded load port and agents.

On 26 March 2018, Sellers messaged Buyers and said that the MV Tai Hunter’s current position and itinerary together with Buyers’ refusal to provide a copy charterparty supported their allegation that this was a fanciful nomination and accepted this as Buyers’ repudiatory breach of contract.

On 28 March 2018, Buyers nominated a substitute vessel, with an ETA of 5 April 2018, and again requested load port and agents.  Sellers reminded Buyers that the Contract had been terminated. On the same day, Buyers made a further substitution and requested load port and agents. On 3 April 2018, the parties accepted that the contract was terminated and on 4 April 2018 entered into a settlement agreement which provided for a price variation depending on the outcome of Gafta arbitration.

Sellers’ main challenges under section 69 were:

Was the making of a “false” nomination a breach of condition?

Sellers relied on Texaco v Eurogulf (‘The Giray’) [1987] 1 Lloyd’s Rep 541. The Board of Appeal had found that the nomination was not “manifestly false in the sense it could never possibly be fulfilled” as in the “Giray” which, when nominated, was in Istanbul and unable to reach Milford Haven during the delivery period.

An ETA should be honestly given and one on which a seller can rely. The nomination of MV “Tai Hunter” was ambitious and incorrect and, therefore, invalid. However, the Board did not consider that this was a breach of condition. Buyers had time to make a further nomination with sufficient pre-advice during the delivery period, and did so. Clause 6 of Gafta 49 provided for a “probable readiness date” and “estimated time of arrival” and that did not indicate a breach which would go to the root of the contract.

The Court held that the Board was entitled to reach its conclusion and dismissed the s.69 application.

Were Buyers obliged to nominate a vessel which had been chartered by them at the date of nomination?

Mr. Justice Henshaw commented that the essential need of a seller is for a valid and timely nomination and for the vessel to then arrive on time. A buyer’s obligation to bring that about requires timely and effective steps to be taken to secure the vessel. He could not consider it possible to infer that the parties considered it a condition of the contract that the charterparty be actually fixed at the time of nomination.

Was the obligation of the Buyers to provide a copy of the charterparty at seller’s first request a condition of the Contract?

Concluding that this was not a breach of condition, the Judge considered that it would be clearly illogical for a buyer to be held in breach of condition for failing to provide a copy of the charterparty relating to what might well turn out to be not the effective nomination.

Sellers were also given permission to appeal two issues relating to interest on the construction of the settlement agreement under s.69. The Court upheld the Board’s view that interest should run from 4 April 2018 and dismissed the challenges.

In relation to the challenge under s.68 of the Act, the Court considered that neither of the issues put before it caused substantial injustice and did not amount to serious irregularity.

It followed that the Court dismissed all s.69 and s.68 challenges and upheld the Award.